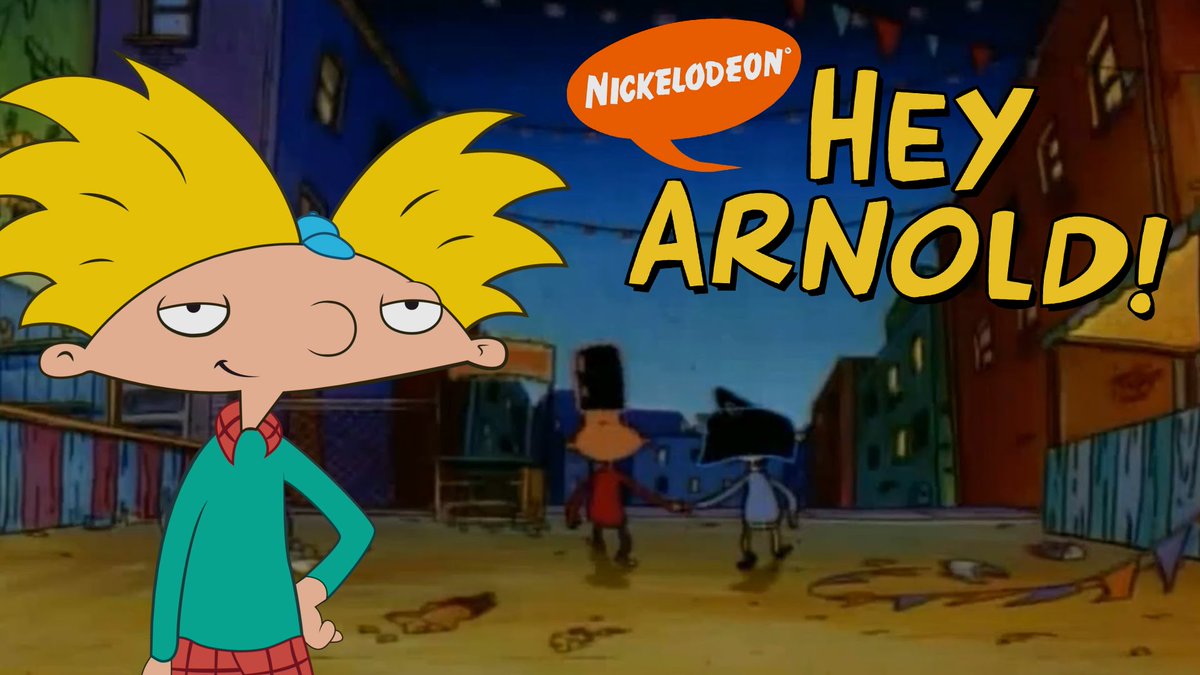 “The half-hour specials are all favorites of mine, like “Parents Day” and “Journal.” They were meant to set up the story of Arnold’s missing parents that The Jungle Movie addresses. I also think the Christmas episode is really great, and I love “School Play,” where Helga confesses to Lila that she loves Arnold.”

It is around this time of year that the ‘Top 10 Christmas films’, ‘Top 5 Christmas moments’ and the like start to float around Buzzfeed, get shared on Facebook and generally litter your web pages. To be honest I won’t even pretend that this article is any different, except for the fact that I’ll be definitive and say; the Hey Arnold! Christmas Special is the only Christmas special you need. Hey Arnold’s creator Craig Bartlett may be being modest with his comment above, and it’s actually quite the Arnold trait to be so, but this particular episode whilst following the moralistic traits has some massive emotional weight to it.

The plot starts out like many Christmas TV episodes. It’s fast approaching Christmas in the Arnold household, and all of the caricatured residents have gathered to partake in the traditional secret Santa roulette of presents. Arnold draws Mr Hyuhn, the somewhat stereotyped and mildly offensive Vietnamese resident. Not knowing what to get Mr Hyuhn wears Arnold down, but not in the sense of capitalism, but because with his moralistic thinking he wants to get him a gift that will ‘mean’ something to him. As you do with secret Santa, Arnold seeks out more information regarding Mr Hyuhn to get any kind of inclination as to what he can get him. He draws multiple blanks. Rather sacrilegiously he goes directly to the man himself to find out more about him. It is here that the first act in the classic three act structure of Syd Field, comes into play and it is an act deeply rooted in sad realities.

Mr Hyuhn tells the story of how 20 years before he came to America, he lived in Vietnam during the war. As the war reached its peak, he had to make the incredibly tough decision to hand over his young baby daughter, Mai, to an American soldier bound for the States. It suddenly gives a reason, other than to be an awkward asian stereotype, for Mr Hyuhn to exist in the Hey Arnold universe. It is the motivation for why he moved to the city, to find her, and it is the reason he stays. 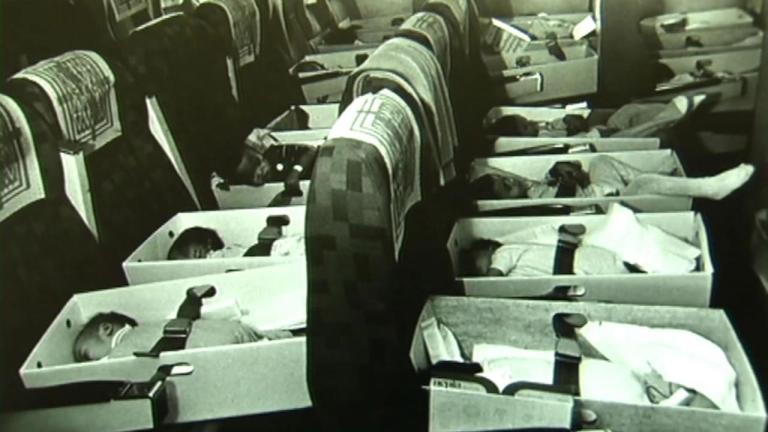 This story whilst presented in cartoon flashback, is anything but fabricated. In 1975, shortly before the fall of Saigon, American planes took the decision to evacuate nearly 2,500 orphaned Vietnamese children out of what we now know as a brutal and controversial war zone. Alongside this mission by US soldiers, there were similar missions by Australian, Canadian and European planes. This was known as ‘Operation Babylift’. These children were all bound for adoption in the US, but much like the war itself, there have been many disputes and doubts around the methods behind it, and specifically the status of orphanhood. Many parents even took the step of going to court to fight for custody of children that had been placed into adoption without their approval.

In Maryann George’ piece, the story of Mrs Van handing her child over to gain him safe passage out of the war zone mirrors that of Mr Hyuhn in Hey Arnold. However, what isn’t necessarily represented, and rightly didn’t need to be in an episode of Hey Arnold, is the fate of its maiden flight. A US Air force plane had taken off from Vietnam with 243 passengers, mostly children, bound for America the plane came down in an emergency landing shortly after take off, with over 80 children amongst the dead. Luckily, the operation did continue and evacuated thousands of children out of a war zone which claimed hundreds of thousands of lives. 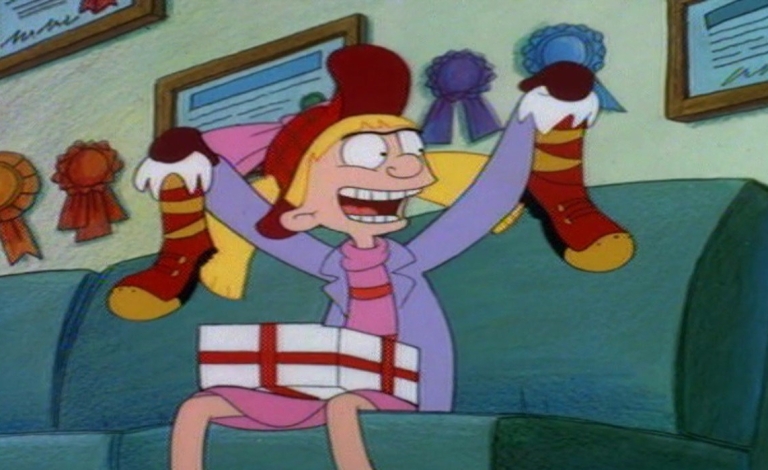 To continue with the plot, Arnold makes it his mission to help locate Mai and enlists the help of best friend Gerald. Alongside this the lovelorn Helga struggles between what to buy Arnold (Her hidden adoration still intact), and her capitalistic desires of Christmas to receive the Nancy Spumoni snow boots. A product which has almost sold out in the fervour of retail at Christmas. A product that is rather conveniently atop of Helga’s Christmas list. As you can imagine the two paths cross in the second act of the story.

On Christmas eve Arnold and Gerald head to the (rather generically named) Federal Office of Information to try and locate Mai. When they arrive they come across an office Christmas party and Mr Bailey, who in not partaking in the party, both plays the role of the Christmas grinch and their antagonist. He refuses to help them, but when they overhear a conversation with his wife regarding buying Christmas presents, they offer their help in return for his. And low and behold, at the top of the Christmas list is….. a pair of Nancy Spumoni Snow Boots! Everywhere they go they struggle to get them, consumerism leaving them deflated and defeated, if you somehow felt sorry for Arnie in Jingle All the Way, you’ll empathise with Arnold in his struggle. 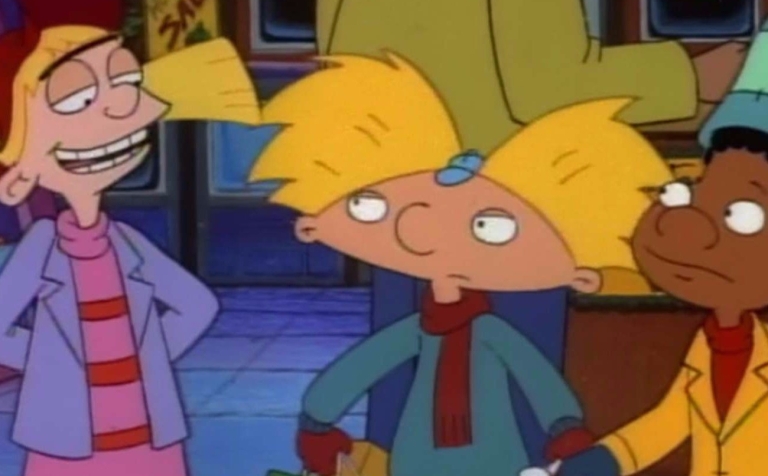 As you can imagine, Arnold and Gerald’ paths cross with Helga who, as always, has a front of distaste for our football headed protagonist. Discovering their plight, Helga witnesses the evolution of Mr Bailey to fully formed Grinch as he denies Arnold information because they didn’t get everything on the list; the Nancy Spumoni boots eluding them. So when Helga receives them as a gift herself, her conscience, as it often does, comes into play. Finding Mr Bailey, she does what Phoebe believed was not possible, and commits a selfless act, presenting him with her pair of boots in exchange for help finding Mai. Of course this also comes via the ‘True meaning of Christmas’ speech that is obligatory, a rubber bullet shot at consumerism.

And so as we hit the third act, we get what was inevitable once we were shown the first acts hand; a reunion between Mr Hyuhn and his daughter Mai. Whilst this is an emotional scene in itself, plot to show the ‘power of Christmas’, the real life context of such a meeting adds even more weight to the scene. In reality, most of these adopted children have never seen their families since they became refugees.

If it appears I have politicised a children’s TV show, that was not my intention. But as watching this specific episode has become a Christmas tradition of mine, I felt the need to explore the context behind such a brilliant emotionally crafted episode. We often don’t expect this context in cartoons, especially in a Nickelodeon property. Often such context comes in the shape of satire and can be presented in a much more cynical fashion à la South Park. For Hey Arnold, this was not its intention in the message. In fact, from memory I don’t believe Vietnam is even mentioned in name, this isn’t a political ploy. It is a bold decision by Craig Bartlett to use this historical event to influence and provide the foundation for a Christmas special. But it is a decision which brings an increased emotional weight to the moral compass that accompanies every Hey Arnold episode. I would be lying if I said, no tears have ever been shed when I have watched it.

If the aim of a Christmas movie is to give you that warm, fuzzy feeling inside, then consider this episode the Aga cooker of Christmas episodes. Watch it if only because it took me nearly 6 hours to find a stream of it, and if watching pirated cartoons isn’t the true meaning of Christmas, I don’t know what is.